I Do Not Welcome the Great Pumpkin!!!! 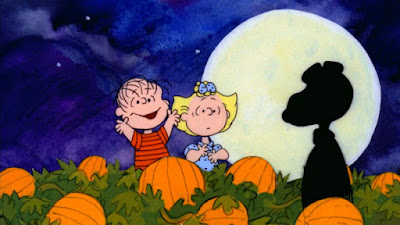 Personally, I’m not a fan of the scary part of Halloween.  I don’t like haunted houses, ghosts, demons, horror movies or the dark.  Unlike Linus, I do NOT want to see the Great Pumpkin.  But here are a few ghost stories from my own family that I thought some of you would enjoy.

Ironically, the first story involves me when I was a baby. When Mama found out she was pregnant with me, my Great Grandfather Cameron was one of the most excited family members.  He was waiting on my arrival with great anticipation.  However, in October 1972, he died of a massive heart attack.  I was born just a few months later in December.  A few days after they brought me home, Mama got up to check on me during the night and make sure I was ok.  When she walked into the room, she saw my Great Grandfather and another women just standing there peacefully looking at me.  Well, she went back to bed and wondered if she was dreaming or possibly crazy.  The next day, she was telling about what had happened.  Of course, everyone thought it was funny and it turned into a big joke.  However, when she told Mema Brafford about what she saw, Mema asked her what the lady she saw had on.  Mama described her outfit in great detail.  Several years before Mama and Deddy ever dated, his Grandma Brafford passed away.  She was a tough woman in her life but she loved her family and especially her grandchildren.  When Mama described what the lady had on, Mema Brafford immediately realized that it was the outfit that Grandma Brafford was buried in.  You see, before they both passed away, Grandma Brafford had been very good friends with my Grandfather Cameron.  All the sudden, the story was no longer just a joke.

Another story occurred when my Mema Brafford was staying with her brother many years ago as he was in his final days.  He had acquired cancer and it was only a matter of time before he passed away.  She was sleeping on his couch and she woke up to the room being lit as if someone had turned on a bright light.  Her father and one of her sisters walked through the room into Herman’s room.  A few minutes later, her mother and another sister walked into the same room.  She said that the room looked like it had the brightest lights she had ever seen coming out of it.  She did not move because she did not know what in the world to do.  The next morning, she did not mention it to Herman.  However, he did.  He told her about the family coming to see him the night before.  They told him they would be back very soon to take him home and to not be afraid, everything would be alright. He said they would return in the form of a white dove to take him home.  Herman died within just a few days.   In my family, if you tell something like that, you are probably going to get laughed at and Uncle Boyd is going to make about 50 jokes about it.  So, she only told Mama and Deddy.  After the funeral, everyone was gathered at Mema Brafford’s house and just talking about Herman and that everything had been handled very respectfully.  Someone started talking and said that the strangest thing had happened that day.  When the hearse pulled out of the parking lot at the funeral home, a white dove got behind it and flew back and forth all the way out to the church.  When the hearse pulled into the parking lot, the dove flew off.  In case you’re keeping score, that would be when Herman went home.

The year that Deddy was sick, several strange things happened that we just could not explain.  I remember a few months after he come home.  He said that after he had his surgery in Chapel Hill and it was not successful, for the next 3 days, he felt the presence of true evil in the room with him.  He felt like the presence was making every effort to make him bitter and angry.  But after 3 days, he made his mind up that although he was disappointed, he was going to make the most of whatever time he had left.   In the last few months he was here, we witnessed a number of unusual things.  One time he was laying in the bed and looking up and smiling.  Mama asked him what he was looking at and he waved and pointed as if he was pointing to the top of a mountain and said,  “See all of those people, they are waiting on me to come up there.”    A few weeks later, he would be waving at people that were much closer.  The last week, they were in the room.  He did not make an issue about it.  He seemed to think that we could see the same thing that he was seeing.  Just a few days before he died, I was helping him up by pulling on his right arm.   He reached straight out with his left arm and said, “Help me up Harold!” and he kind of laughed as if “what is Harold thinking just sitting there doing nothing!”   The irony is that Harold was his Uncle, who had died a few months earlier.   At the end of Mema Brafford’s life, I called Mama and Travis and told them that they needed to come up to the Assisted Living facility that she was in.  When Mama got there she was really happy that Mama had come and said, “Hey Brenda, so good to see you.”  Mama responded that it was good to see her too.  Mema said “Bob’s here too!”, which caused Mama to get a little upset and she said, “Well that is good Mema, but I can’t see him.”    That somewhat aggravated Mema who responded, “Yes you can! He’s standing right there!” and she pointed.

My brother Travis has two children, Colton and Brooklyn.  They are both great kids and they know that Uncle Robbie is #1!   Well, Brooklyn hit Colton one night and did not hurt him, but Travis was trying to teach her a lesson.  So, he punished her with the dreaded, “Timeout.”   Travis said she was screaming as if he was beating her with a cane from the Philippines.  All of the sudden, the phone rang and "499-9750" came up on caller ID.  Travis answered it, no noise at all.  He called it back, “this number is no longer in service.”  Ironically, for probably 30 years, Deddy’s office number had been 499-9750.  Guess what?  Timeout was over.

Happy Halloween to all of you and I hope all the children stay safe and get plenty of candy to eat!!!!