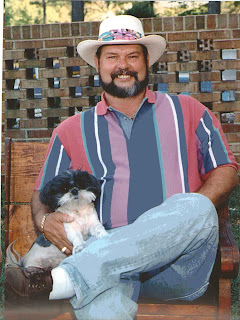 You know we've seen a lot of things the last 10 years that I would like to erase from my memory. 9/11, Katrina, Middle East war, etc. But, you can't forget these tragedies. They are emblazoned in our minds to forever cause us grief.

Deddy died 10 years ago on September 13th, 2000 at 1:30 P.M. I really don't talk about it much because I prefer to think of the good times. I like to think about deddy sitting back in his chair and telling me why Nascar was so much better than basketball, or why baseball players were a lot better 25 years ago than they are now, or that if you want the absolute best Coca Cola in existence, you have to get the 6.5 oz GLASS bottle! We had conversations like that a lot and I love recalling some of them every day. I know when I started working in Raleigh selling real estate, I worked on the weekend a lot. My days off were often during the week. One Monday night we were sitting there watching TV together and he said, "How many condos did you sell this weekend 2?, 3?" He was exaggerating in a positive way hoping I had sold ONE. I said "6". He laughed and said "Nah, really did you sell a couple?" and I said...."6, I sold 6 this weekend" and he said "DAMN!! I'd say that's a pretty good weekend....can I borrow some money?" and he started laughing. But he was proud that I had finally started moving forward with my career.

I often try to think of ways I can help people. The reason I do, is because deddy did it all the time. I knew a lot of things that he did in his life, but what made me respect him even more as a good man were the things I found out he did in the years after he passed away. He was a lot more forgiving of others than I am. He always believed that a person should be given another chance if they seemed sincere.

I tell you what, he could not have been more positive when he was dealing with cancer. He had a funny way of looking at things sometimes. I remember one time he was on the golf cart and he was having a harder time steering it. Instead of becoming frustrated with his demise, he said, "ya'll need to grease this steering wheel when you get a chance, its getting harder to steer!". He had rules as time passed. Immediate family and the preachers were always welcome to visit. But when he really felt bad, he did not really want to see people that were not immediately family or really good friends. There are people I don't want to see sometimes even when I feel great. Another rule was that you better not run out of Kool-Aid or 6.5 glass bottle Coca-Colas. He told me to run to the store one time because we were low on Cokes and when I looked in the refrigerator we had a case! Our TV in the living room ran almost 24 hours a day for the year he was sick. Here is the TV schedule for that year; Nascar, ball games, "Who Wants to Be a Millionaire", and the Western Channel....and that's it. If another channel was on, it just so happened that there was a show he wanted to watch. He liked to watch NBA games only when Michael Jordan or Shaq were playing. He had been a Bill Elliott fan for years on the Nascar circuit. Ironically, not long before he died, Elliott won two races back to back and he had not won a race in several years. Another rule he had was that if somebody did not know where Uncle Boyd was by 5:30, you had better be on the phone finding out where he was. He loved Randy and Sammy too but he could look out the window or ride down on his golf cart and see if they were safe at home.

I think deddy knew his actual situation before anyone else did. But he didn't talk about it. He especially did not talk about it around me, Travis, or Papa Brafford. Around us, he was determined that he would live.

Although I miss my father every day. I am glad he did not see 9/11, or Katrina, or Duke win another national championship last year, which was also tragic. But I do hope he is able to know some good things; we still put up the Christmas lights, Travis' little boy Colton looks like him, we still play golf with Uncle Boyd on a regular basis, and we make "Brafford Farms" wine at Christmas to give away to our family and friends.

My father lived a life that we could all envy. He was wealthy in so many ways. He had good friends, he loved my mother, he had a good relationship with his parents, and he enjoyed being involved with the community in different ways. He made the most of whatever life offered him. I am so grateful to have had the time I did have with my father. I also firmly believe that if we all keep the faith, those of us that miss him will be able to see him again. Ten years later and I can still hear his voice in my head like I talked to him yesterday.....and that is one thing that I hope never goes away.
Posted by K-Rob at 7:28 PM No comments: