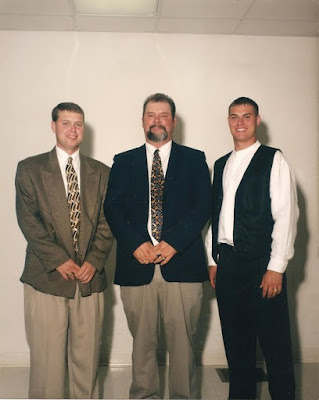 I learned a lot from my father during his lifetime. The older I get, the more I realize how truly wise he was about life. He taught me to work hard. He never misled me to believe that life would always come easy. It was the opposite, anything worth having or accomplishing will usually take a lot of hard word and effort. Giving up and quitting would lead to failure 100% of the time.

Deddy taught me patience. We all want, what we want, when we want it. Life does not happen like that. Determination and persistence are keys to reaching goals in life. He was very patient when it came to his friends, his family, Mama, Travis and I.

My father did a lot of good things in his life that he did from his heart and not to earn credit or praise. He always honored his mother and father. He was quick to recognize the best qualities of all 3 of his brothers. He would always help a friend any way he could. He loved my mother and he loved me and Travis.

But the most significant aspect of life I learned from my father was forgiveness. Honestly, I am STILL working on that. Deddy would forgive somebody over and over again. I could never understand it. But it was just simple and normal to him. His ability to forgive others was one of his best attributes. I saw him forgive people time and again in situations that most people would not have offered a second chance. I think Deddy believed that no matter what, there was good in most people and they deserved the opportunity to try to make better decisions.

When he had cancer and knew he was dying, although he was concerned, his own demise was not what concerned him the most. What he worried about was his mother and father, Mama, me and Travis, his mother-in-law and his brothers. It was unreal how much my father did for so many people. I did not realize just how much of a void he was going to leave behind when he passed away.

In wake of the tragedy in Charleston this week, I was thinking about another experience my family had that was much more positive. We were invited to a church in Burgaw, N.C. to meet with a prayer group to pray for my father. And guess what?.....it was a black church! We were greeted warmly, treated with complete respect, and made to feel totally welcome. That night, the group prayed for Deddy with everything they had. Now, let me just tell all of you something, these people didn’t just say reverent, quiet prayers. Oh no, they were absolutely “getting down” with prayers. It was really a moving experience that my family was truly grateful for. I recall one lady hugging me when we left and she said, “Don’t worry, your Deddy will be healed!” I don’t think I realized at the time that she meant, “one way or another”, but the truth is, she was right.

I don’t have any idea as to what our loved ones can see when they pass away. I know that many people have various opinions but nobody really knows. I would like to know that Deddy can see some of the good things in the world. I would like to know that he can see his family and his friends having good times together. I would like to know that he can see Colt playing Tee Ball. I would like him to know how much everyone appreciated him and loved him while he was here, and they still do. Personally, I would like him to know that although I have been through a tremendous amount since he passed away, that I’ve never given up. One of the things I miss the most about Deddy is that, he was always proud of me whether I succeeded or failed, as long as he thought I did the best I could. Some of his most encouraging talks came after some of my biggest disappointments. Just another reason, to miss him a little bit more, on Father’s Day.
Posted by K-Rob at 9:47 PM No comments: