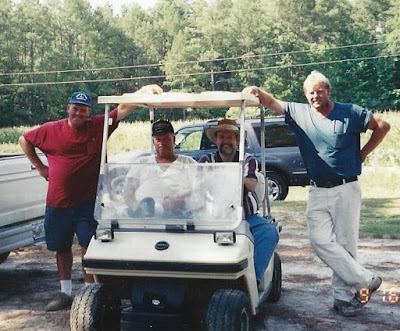 My father was a person of great respect. He respected his mother and father, his brothers, his wife, his children, and his friends. He also respected people he did not really know just because that was the way he was. He respected authority such as law enforcement. He always respected laws and rules. Because of the respect he gave to the world, he earned an incredible amount of respect for himself.

He felt a significant affinity towards all three of his brothers. He loved each one of them, accepted their differences, and wanted to see all of them do well in life. So I decided to ask each of them what they respected the most about my father.

Randy said he was just simply a good man. He was never selfish and gave of himself anytime he could. He admired the way Deddy loved life in general and didn’t let adversity make him bitter or negative. But the aspect about my father that he respected the most was his love for his family. It was genuine, sincere, and without judgment.

Sammy said that he respected his generosity as much as anything. He recalled that every year, Deddy put together bags of fruit, nuts, and a small gift and gave them out to the elderly people in the neighborhood. He didn’t do this to win an award. He didn’t do to be recognized. He did it because he thought it was the right thing to do at Christmas for people he had known most of his life. A lot of people that still recall him delivering those bags at Christmas and without him realizing it, I believe it was one of his greatest acts of generosity.

Uncle Boyd respected him for the fact that Deddy loved him so much. If you know Uncle Boyd, he can give you absolute hell by picking on you about anything. He told me that if he had been Deddy, he would not have put up with some of his OWN joking and picking! But he said Deddy just took it in stride and would usually have a sharp comeback. Uncle Boyd really respected the fact that he was genuinely just a good person and always considered what was the right thing to do in all situations.

They all recalled a year when a family had their house to burn down just a few weeks before Christmas. Well, Deddy called a bunch of people and briefly explained the situation, then TOLD them the amount they would be donating. Then he sent Mama shopping and a family that was in crisis was able to enjoy Christmas that year.

I know growing up, my cousins and even many of my friends respected Deddy as much or more than they did their own parents. I have a friend named Anthony McPhaul that I played baseball with in high school and now he works at the Dairy Bar. He did not know Deddy that good but has told me how much he respected him because he felt like he looked at him as “just one of the guys on the baseball team” and treated him like he did everybody else. Jason McPherson respected Deddy probably almost as much as I did.

One night I was at David O’Quinn’s house and we were debating doing something we shouldn’t do. I don’t recall what it was, but it was probably something simple like “robbing a bank.” Anyway, I was reluctant to go along with the idea and noted, “If we got caught, my Deddy would kill me.” David’s buddy chuckled and was like, “so, you’re scared of your Dad?” David immediately responded with, “Troy, do you know who Grizzly Adams is?.....well, imagine him on crack cocaine and angry….that would be Robbie’s Deddy mad.” Troy immediately understood the analogy and we just played basketball.

It is hard to describe how much Travis and I respected our father. He never let us down in any capacity. He didn’t give up on us when we failed and he did whatever he had to do to be a provider for our family even during very hard times. He respected our mother and he loved her unconditionally. He did whatever he could for his own Mother and Father and made sure that his mother-in-law was also taken care of.

I don’t think I had an actual idea of just how many responsibilities Deddy had until he passed away and much of that responsibility was passed off to me by default. I can assure you, as easy as Deddy made it look, it was overwhelming. I respect him more today than I ever have.

The generosity my father exhibited in his lifetime was truly admirable. He gave of himself without really giving it much thought. The little things he did are the things people remember the most. He used to take Mama and Mildred to the mall on Saturday nights sometimes and would just sit and wait for them to shop. I know a lot of men who would not do that on a regular basis. Maria recalled during hurricane Fran that we got our power back before her family did. So, Mama and Deddy immediately took our generator over to their house to use. Instead of enjoying a cool house and getting things back to normal at home, they thought of another family and reacted immediately.

I don’t question God’s decisions. I know He is right whether I like it or not. But I think about my father passing away at 48 and I can’t help but think that he had a lot of good left to do in a world that seems to get worse by the day. But, although I miss him and regret he is no longer here, I’ve accepted it. I’ve also considered that maybe its possible that he had done all the Lord wanted him to do in 48 years and it was time to move on. Either way, I know his family and friends still miss him. If the world would make more of an effort to earn the respect of each other in all regards, I certainly think there would be a lot less “bad news” to report all of the time. When you really do think about it, MOST of the terrible things happening all over the world are very simply because people do not have respect for each other. Ironically, one of Deddy’s best attributes was that he respected people for who they were, even when it meant accepting differences. I think that is probably the reason so many people respected HIM as much as they did. It’s been 15 years since he passed away and people still talk to me about how much they miss him, how much they would love to see him again, and how much they truly loved him as a man. For him to have left such an impression on so many people is truly indicative of how respected he really was.
Posted by K-Rob at 3:05 PM No comments: