The Essence of Success 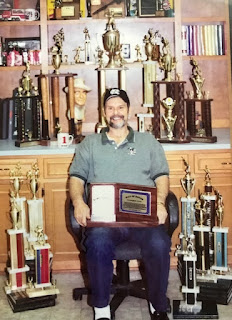 “Successful is the person who has lived well, laughed often, and loved much;  Who has gained the respect of children; Who leaves the world better than they found it;  who has never lacked appreciation for the Earth’s beauty; Who never failed to look for the best in others and who always gave the best of themselves.”

That quote hangs on my wall with this picture of Deddy.  A few months before he died, we arranged his trophies, awards, and plaques in his office and had him to sit with all of them and take a picture.  He had been voted into the NC Hall of Honor just a few days before.  He laughed and asked us why in the world we wanted him to do that.  I told him because he had earned it and he sat down.

But the picture is not just of Deddy sitting with a bunch of trophies.  It’s not a picture of arrogance nor of being too proud and it would not even begin to tell the story Travis and I know.  It shows a countless number of hours on T-Ball, Little League, and Junior League fields.  It shows long days picking up other kids during the summers just so they could play ball.  It shows so many times when he gave encouragement in both victory and defeat.  It shows dedication to his community and the pride he took in helping so many times in different ways.  I see friends to this day that immediately reminisce about playing ball during the summers.  Everybody that played on one of his teams loves those memories.

When you look at the trophies behind him, its easy to see success.  However, it does not show the challenges he faced throughout his life.  The years he got up before daylight to start his day to provide for  Mama, Travis and me.  It does not show the worry and stress during times when the economy would slow down and it would be a lot harder to make a living.  It doesn’t show the hours he worked at night just to get ready for the next day.

I see so many of you on Facebook who have lost family members.  I know many of you have also lost your father.  I cannot tell you how sympathetic I am for you because I know exactly how you feel.  I still miss Deddy as much now as I did the week after he passed away.  I regret that I cannot sit down and talk to him sometimes so he can help me make a decision.  He was on my mind even more the last few years as Mama battled cancer and Mema Brafford’s health declined.  I often wondered if he knew what was going on and what he could see.  I know that Mema Brafford saw him several times during her last few weeks so I’m certain he was on her welcoming committee!

I certainly learned a lot from my father.  He was always supportive and encouraging but he also taught Travis and me respect.  He didn’t do that by force, but instead he led by example.  That was one his best traits.  He was respectful of everyone around him.  He was a good son to his mother and father.  He was a good brother to Randy, Sammy, and Uncle Boyd and anytime one of his brothers needed him, he was there for them immediately.  He respected my mother and he appreciated everything she did for him as his own health declined.  In turn, when Mama was battling cancer, I did not hesitate to do everything I could to help her.

The saving grace of losing someone so close to you is knowing that they are at peace and there is no more sickness or sorrow.  I often wonder what and if they can see anything.  I hope he knows that I honored my promise to him.  I hope he can see how much his grandson, Colton, looks like him.  I hope he can see Travis and me coaching T Ball games and he is reminded of the fond memories that we have.  I hope he knows how much I miss him.  I hope he knows that so many people honor him often simply with a fond memory.  Deddy lived well, laughed often, and loved much.   Although his time on Earth was not nearly as long as I would have liked, the example he set as a father lives on through Travis and me.  As time passes by, if we can reflect on our own lives and see that we emulated Deddy’s life, that will certainly be something that both of us can be proud of.
Posted by K-Rob at 10:59 PM No comments: