The Sword of Brenda 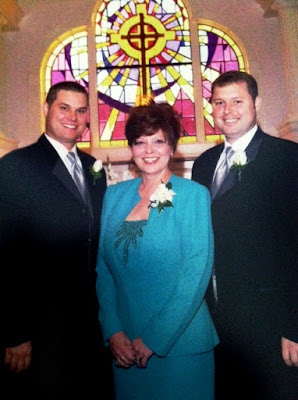 When we were growing up, one of the recurring themes Travis and I heard from our mother was that she would NEVER tolerate either of us beating on a girlfriend or a wife. No matter how old we were, she would not allow us to cause a woman emotional or physical abuse. If we ever did make such a ridiculous error in judgment, we would suffer at the hands of “the sword.”

Travis and I heard the story of “the sword” many times in our lives. I don’t know why because neither of us ever gave any indication that we would be abusive. But the story would always surface when Mama would hear a story of someone being in an abusive relationship. Mama is truly one of greatest story tellers that I have had the fortune of being around during my life. I just had a feeling that many of you would enjoy “The Sword of Brenda.”

So the subject would generally become the topic of conversation when someone that we knew or being covered in the news had a physical confrontation. Mama would go into the “lesson” that we heard many times. She would start out by explaining how wrong it was for a man to beat a woman as a show of force. She felt that if a relationship ever got to that point, a couple either needed counseling or the relationship had run its course. Then she would explain… “If either one of you boys ever decide to hit on your girlfriend or wife, do you want to know what I’m going to do? Do you?” Now, considering we were never like that anyway, we really didn’t need to hear what she would do but it was not optional to listen to what her reaction would be.

So, she would continue as only Mama could…. “I’m going to get a sword. A big, long, super sharp sword.” With this explanation she would spread her arms apart as far as she could to reinforce just how long this sword would be. “It will be a sword from a great Samurai warrior who did NOT beat on his wife.” Because, a sword from a Samurai warrior that DID beat on his wife I guess would not be worth a damn! “And I’m going to hold it over my head like this” as she held the imaginary 8 foot long, razor sharp sword HIGH over her head.

“Then when you walk in, I’m going to ask you how your day has been.” As if we would not be suspicious of our mother holding a sword over her head, but ok. “Then I’m going ask you if hitting on a woman makes you feel good.” With this, she would stretch her arms as high as she could get them. “AND THEN, in one single swoop,” as she sliced through the air with her imaginary sword, “I’m going to cut your ‘nunads’ right off!” Trust me, no man alive likes the thought of a sword cutting off that part of his body. We would always cringe at the thought, but if you think the story is over, think again.

Ok, so how terrible is that thought, really? Apparently, not terrible enough. “Then I’m going to wear them at Christmas!” So now she is walking around the living room as if she is strolling through the mall. “Then, I’m going to see somebody I know and they are going to tell me that they LOVE my earrings!” Her imaginary reaction to the question would be one of DELIGHT and she would respond… “Oh, theeeesssee earrings?!” As she would swing her head back and forth. “Well, my son decided he was TOUGH, he was manly! A pure badass that decided he could beat on his girlfriend! SO, I cut off his nunads and made Christmas earrings out of them!” Was the imaginary person shocked in this rendition? Appalled? Mortified?.....no, of course not. “Oh Brenda, I LOVE them! I bet your son understands not to do that anymore, don’t he!?” and Mama would respond, “Why yes, I believe he does.” She would always end “the sword” with “And I’ll do it too!” I guess just to make sure that we did not doubt her anger if that situation ever occurred.

Needless to say, that has never been a problem, but we always knew where our Mama stood on the issue. OJ Simpson needs to thank the Lord above that Mama was not allowed to determine his punishment.

As many of you already know, Mama was diagnosed with cancer in September. We have been through this with Deddy, who passed away 15 years ago. It has certainly been a difficult time. The toll of chemotherapy and radiation has been challenging, tiring, and exhaustive. Emotionally for my mother, it has been overwhelming. But her prognosis is very encouraging and the medical team helping her, have been great. They have told her continuously that in her specific situation, they can “cure” her. As a family, we really do have a lot to be grateful for. I would encourage all of you to take the time this Christmas season to thank God in prayer for whatever blessings you do have. It’s so easy to let the challenges of life overwhelm you and become the only aspect you focus on. But, if you take a deep breath and give life some patient thought, we ALL have things to be grateful for. I have a lot to be grateful for, but this Christmas season, I am truly grateful for my mother and I hope she gets back to wielding her sword in the near future……..just not at me!
Posted by K-Rob at 6:27 PM 2 comments: