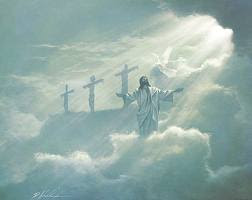 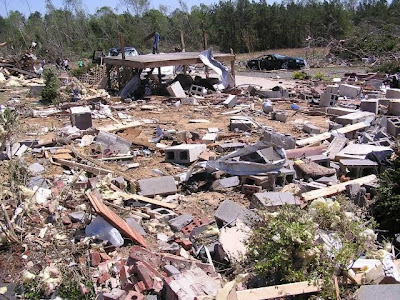 Well, its that time of the year again. Spring is drawing near, the world is turning green, and “The 10 Commandments” will once again come on television. If you are not familiar with the greatest movie of all time, I would encourage you to refer to my previous blog in which I give a “cliff notes” of the movie. http://k-robsworld.blogspot.com/2009/03/well-well-well.html Or better yet, sit down and take 5 hours out of your life and watch it!

This Easter, I must admit, I write this with a heavy heart. The devastation of tornados that ripped through North Carolina affected many family and friends of people I know. The considerable damage that was done reminds of just how quick a life can meet very difficult circumstances. My Uncle Jamie and his wife had their home destroyed. The Saint Andrews area of Sanford was absolutely devastated. Lowe’s Home Improvement, which is made out of steel and concrete looked like a tin can that had been torn apart. A horse farm in the Broadway area was forced to euthanize 17 horses. It turned out to be the most destructive system of tornados to ever pass through North Carolina. It causes one to wonder why things like this happen at all.


Traveling quite a bit now, I am alone a lot. Although many of you will be astounded by this, but I spend a lot of time reading and thinking. By the way, I also spend a lot of time going into bars and fighting people that make fun of the way I talk, but that’s a different story. I don’t really spend any time dancing because I can turn that talent on in an instant. I don’t know why things happen such as tornados, hurricanes, tsunami’s, typhoons, floods or other tragic events. But I do think there is a reason. I have no idea what that reason is and I don’t even think Uncle Boyd can explain it. However, I do think that from tragedy often comes prosperity. A devastating event often causes people to appreciate a sense of community a lot more. Anytime something devastating happens, I always think of my family and friends. I think we all do. My Mama will drive me crazy during a storm, or a warning of any kind of difficult weather. She probably called me 100 times over the weekend. She also is a bit crazy under normal circumstances in case some of you don’t know. We can be watching the same TV station, at the same time and her interpretation will be completely different from what is actually being said, and its always more extreme. She will actually hear the weatherman say MY ADDRESS from time to time.

Our TV was out due the storms Saturday and we heard someone on the radio say Lowe’s was destroyed. We could not imagine just how devastating it had been until we saw it ourselves. My mother called me and was crying uncontrollably explaining that Jamie’s home was destroyed and they were not sure if they were OK or not. Maria and I rode over there and we could not get near the home. Fortunately, I saw my cousin and he had talked with his father and they were injured but he thought they were going to be Ok. As we rode around Sanford, the devastation was ominous. Trees had been snapped off like matchsticks through entire neighborhoods, homes had being completely destroyed. Cars were tossed around like toys. It was heartbreaking just to look at. Of course, this story was carried nationwide.

It’s incredible to think of the tragedies that happen from time to time. I don’t understand them at all and I don’t think anyone else does either. But obviously, we are simply not to understand everything. Although as a Christian, I am grateful for what Jesus Christ did for us, I think a lot us wonder why there couldn’t have been a different way. Even Christ himself was in anguish as he prayed to his father about what was to come before he was crucified.

I think about the last several years and have a hard time understanding why some of the atrocities happened at all; the earthquake in Haiti, the Tsunami in Japan, multiple hurricanes, and tornados all over the United States. The entire world is having an economic hardship right now. I don’t know why people should be forced to struggle as much as they have the last few years. Not only is it hard for a lot of people to earn a living, its hard for them to keep their house and often eat. Its also hard when you see good people struggling and bad people doing just fine. I don’t think anyone has a good explanation for a lot of hardships in this world. I am not sure if we’ll ever know. I just finished a book about Job and the horrific trials he went through. But Job was not only restored, he was restored with even more than he had before his struggles. But the Lord never did explain to Job what happened. Nor did he commend him for remaining loyal. I do wonder that when Job died, if the Lord explained to him what had really happened.

It’s always difficult to leave home as I travel. I’m not used to being away from home so much. But as circumstances change, so do our responsibilities. But I have a lot to be grateful for and I know it. I am so fortunate and grateful to have grown up with two great parents and a loving family. I am grateful that I grew up in the area I did where people are so willing to help each other. It is wonderful to know that I live in an area that when hardships occur, the community is there to help. When deddy was battling cancer, it was amazing how many cards and letters he received. When he passed away, we had so much food brought to our house there was no way we could have ever ate it all and we tried to make everybody that came to visit eat something. I feel honored to live in an area where people are so willing to be supportive of others during difficult times.

This Easter, I hope that you are all able to have some quality time with your family and friends. I hope that you are able to have some time to appreciate what you do have. I realize that a lot of you may be going through some challenging circumstances, but I encourage you to retain hope. But we all should be realistic. Challenges, as well as obstacles in life are not often overcome quickly. Time gives us reason to believe that there will be a better day. I wish all of you a Happy Easter!
Posted by K-Rob at 9:01 PM 2 comments: