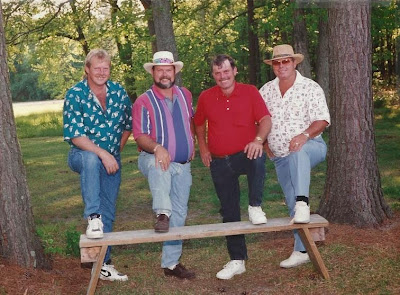 The year Deddy was sick, all of our lives revolved around him. Not because that’s what he demanded, it was just what we all wanted to do. I have heard people say many times that they had rather go quick than deal with a terrible illness. I can see that point in some regards, but I am grateful for the year that Deddy lived. Yes, he had cancer. Yes, it was often difficult. Yes, it was emotionally draining. But the most important thing to consider is that he didn’t die for a year, he LIVED for one.

There are so many things about that year that I will always remember; the concern, the worry, and the eventual demise….but that’s not what I remember the most. I remember the laughs, the good times, and eventually a sense of peace.

There were many rules during that year that were to be followed. They were not written on a board or demanded by my father. As a matter of fact, most of them were quite funny. I thought after 14 years, maybe it would be interesting for everyone to know what the rules were during the last year Deddy was with us;

1. Do not run out of 6.5 oz Coca Cola’s. If you get down to less than a case of them, someone better get to a store and buy some more. Deddy told me one time during that year that we were almost out and I needed to go buy some more. I went to the store and bought several more 6 packs. When I opened the refrigerator in the garage to put them in, there were probably 30 in there. I guess he wanted to be prepared for a lot of people showing up at one time.

2. The TV was on almost 24 hours a day and consisted of the following programs:


a. The Western Channel
b. Nascar on Sundays
c. Who Wants to Be a Millionaire
d. Carolina basketball games
e. Some other ACC basketball games
f. NBA games that included Michael Jordan or Shaq
g. Anything else that Deddy felt like we should watch

3. There were certain people that had an open door policy for visitation.


a. His immediate family
b. His closest friends
c. The numerous preachers that visited him often; Danny, Sandy, and Mr. Brice. Phil Thomas was also extended the same courtesy as the preachers.

4. Besides having 6.5 oz Coca Colas, we always had to have Kool-Aid. It mostly had to be grape and be made by Travis.

5. If Uncle Boyd was not at the house by 5:00, somebody better be on a phone finding out why and what time he would be getting there.

6. The golf cart was to be ready at all times. At any given second, he may need to visit his Mama and Deddy, Randy, or Sammy.

The evolution of Facebook has certainly been interesting. I know we ALL see some things posted that are either stupid or seem too personal to post. But the great thing about Facebook for me has been a way to keep up with people you genuinely care about. My family was so blessed with prayers, cards, visits, and kind words of encouragement that I don’t know if we could ever be grateful enough. My father was a very sympathetic person. Not only did he believe in giving people second chances, I saw him give people MANY chances throughout his life. I believe his good nature made it more difficult for everyone to watch him battle an illness that is seldom defeated. So, as I watch the lives of so many people through Facebook, I certainly feel sympathy for the challenges we all see family and friends going through. But I don’t believe in a life of regret. I think what we all should do is celebrate the accomplishments, success, and triumphs of our family and friends. But, when those same people are going through the difficult times, we should support them with encouragement, compassion, and prayer. Because no matter what, life can change one way or another at any given moment. Deddy had a “wake up call” like no other in fall of 1999. On September 13th, 2000, his battle was over. I’ve read the poem, “The Dash” by Linda Ellis many times that explains that we have a beginning date and a date when our life ends. But what matters the most is the “dash” in the middle because that is the life that we lived. I find great peace knowing that Deddy made the most of his “dash”.
Posted by K-Rob at 12:31 PM No comments: