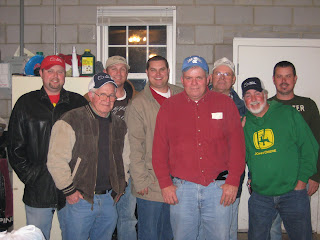 Every Christmas for as far back as I can remember, my father, his brothers and their friends would get together sometime before Christmas and just have a good time. They would cook, enjoy some of Santa's "magic" juice, tell stories about each other, and laugh about life in general.

Of course things would change in 2000 because my father passed away. But it changed not in a bad way, but a different way. We knew how important that party was to everybody and we knew it needed to continue. So, me and Travis insisted the party continue and we started going. As the years have passed a few other friends have earned their right of passage into "Uncle Boyd's Christmas Party".

Now let me make one thing clear. All are not welcome, I assure you. You know how the company you work for, or the school you teach at, or the club you are in is obligated to invite the one or two people nobody wants to come? We don't do that at Uncle Boyd's. You are voted in on merit and your ass can be voted out if you do ANYTHING we don't like. There are no "rights", no union, no court or judge involved. Uncle Boyd is the judge, we are the jury and the buck stops there. I like it that way. A very select group of friends who have all earned their medal.

A man's life is often judged in materialistic ways; how much money he made, how successful he built his business, how many cars he had, and how big his house was. But in reality, these things are not as important when you think about life in a big picture. Things that really are important; how did he treat his family?, how did he treat people in general?, what did he do for his community?, what kind of man was he overall? This theory makes perfect sense if you think about it. I have no idea what Henry Ford was worth when he died, but I know he started Ford Motor Company and revolutionized the auto industry. How much money was Abraham Lincoln worth when he died? Mark Twain? How much money did Mother Teresa earn in her lifetime? You see, nobody cares because it is absolutely irrelevant.

I miss my father everyday. I miss him more at Christmas. If someone could have been a real life Santa Claus, it was him. I cannot remember a Christmas he did not do something good for multiple people. That was his nature. Every year at Uncle Boyd's Christmas Party, he comes up several times. Often times we are laughing, sometimes we are serious, but the times that have always said the most about my father are the times when someone mentions something he did good in his life and everyone just keeps quiet for a few minutes.

My father certainly wasn't rich. But then again, he was. If you measured his life in how much money he made, you would say he had been reasonably successful. But nobody really even considers that. What people remember are things he did good, families he rallied to help at Christmas, second and third chances he gave people, patient advice he offered when asked. They remember his laugh and how friendly he was. They remember how dependable he was, how he treated his family, how he treated his friends. My father's life was measured not by money, but by how many people came to his funeral. The church was packed and people were standing inside and outside the church.

I don't know what people can see in Heaven, I have no idea. But I do think he would be glad we still have Uncle Boyd's Christmas Party every year. He would like it when Tony starts singing Elvis Christmas music, he would laugh about James becoming agitated when he gets confused about the card game going on, he would give Uncle Boyd some of the grief back that Uncle Boyd gives the rest of us, and he would talk to everyone and make everybody feel welcome. That was my father. This will be the 10th Christmas he has not been here and I can remember his voice in my head like we talked yesterday. I know he's happier, I know he's well, but I still miss him. For me, he was the one person I could ALWAYS go to for advice. There have been many times when I had to make a decision alone that I never would have when he was living. But that's life and it goes on no matter what. But what I really hope is that some way, he's able to see Uncle Boyd's Christmas Party and enjoy the good times that we still have.
Posted by K-Rob at 8:41 PM No comments: