A Date to Remember 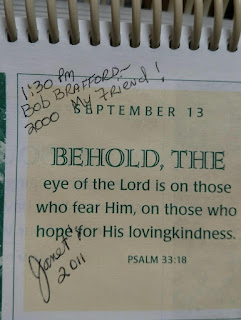 In July of 2000, our family went to Johns Hopkins Hospital for our weekly visits with Deddy.  We would drive up on Sunday after church, stay the night, he would get his treatment on Monday morning, then we would leave and be home that night.  We did that for about 6 months.  But the last visit was quite different.

One of the first things I noticed when we got to the hospital was that a number of the normal staff members were not there that day.  We had been going for so long that the doctors and nurses that worked in the oncology department became friends.  Everyone was always helpful, supportive and encouraging.  I was surprised that so many were not there that day, but I grew to understand why.

Travis and I were sitting in a small room where Deddy would be given an IV that injected the medication or chemo that he was receiving.  I got up and left the room to go find out what Mama and Donna were doing in another room.  When I walked in, a doctor that we had not seen as much was patiently talking about Deddy and his medical situation.  Then Mama asked her, “So what are we looking at?”   The doctor answered, “Probably two weeks.”   Since I had just walked in 30 seconds earlier, I asked “Two weeks until what?”  I’m standing there thinking…. until they change his medicine?  Until they do another scan?  Do we skip a week and come back in two weeks?   But the Doctor looks at me and then back at Mama and had a look of absolute shock and concern at the same time.  That’s when I said, “To LIVE????????”  The Doctor obviously overwhelmed and upset herself looked at Mama and said, “Oh my God, I didn’t realize that he didn’t know!”    At that moment, I knew what two weeks meant. That was one of the hardest things I ever had to hear in my lifetime.  I was 27 years old and the time I had to spend with my father was potentially only 14 more days.  I hyperventilated, I freaked out, I was angry, I was beyond hurt and I walked into another room trying to calm down, but it was almost impossible.  Mama walked in there and tried to calm me down and said that it was going to be alright.  Until that day in my life, I think I had been a boy and a young man.  That day, I became a grown man and I knew that it was a lot more complicated than “it was just going to be alright.”

In the time Deddy was sick, I never cried in front of him.  I am convinced with all my heart that the Holy Spirit helped me in those weak moments to strengthen my resolve for the sake of my father.  I gathered myself and was able to keep my emotions under control.  One of the hardest moments that day for me was as we left, Travis and Deddy were walking ahead of me.  I remember considering that neither of them knew what we had just heard.  I didn’t tell Travis until we got home.  We never told Deddy about that conversation and to be honest, we didn’t have to.  He already knew and he had already accepted his fate and gained his peace.

During the year that Deddy was battling cancer, he had a tremendous outpouring of love and support.  He had several preachers that visited him on a regular basis.  He had family and friends around him all the time and I realized more than ever what a blessing his life had been.  One of the friends that he got to know even better during that time was a gentleman named Ray McNeil, who owned McNeill Paint.  If you are “old school” from Harnett County, he was “Archie Ray.”  I was recently talking to his sons, Jody and Marty about the passing away of their father last year.  They told me that they never realized how much they would truly miss their father because he had always been in their lives.  Mr. McNeill was 77 when he passed away, Deddy was 48.  I never knew before, but Mr. McNeill had a battle with cancer around the same age that my father died.  His initial prognosis was actually worse than Deddy’s initial prognosis, but he was able to overcome the challenge and live 30 more years.  My father talked to him a lot that year and I’m sure it gave him comfort.  In times of great distress, I believe it’s helpful to talk to people of great faith.   I have not met many people in my life with faith any stronger than Mr. McNeil.  Several years after my Deddy passed away, I was in the shop buying paint and he told me to come into his office.  He said he knew that what the next day meant to me.  He turned his calendar around and it said, “1:30 PM Bob Brafford my friend! 2000.”  He used the same calendar every year and he had noted significant events on different days.  Obviously, Deddy was important enough to be remembered on Sept 13th.

We will all lose someone close to us at some point in life.  I see people all the time dealing with health issues, life challenges, even death.  I have learned over the years just how important it is to be supportive of others during difficult times.  We live in a world where people can gain fame, fortune and notoriety for some of the most unusual reasons.  But when life is coming to an end…. fame, fortune, money and possessions simply don’t matter. The person you have been, the people that you care about, the life you have lived, and your faith in Jesus Christ are the only things that matter. September 13th, 2000 changed the lives of a lot of people, especially mine.  Archie Ray McNeil thought it was significant enough to note it in his calendar.

You see, the doctors and nurses at Johns Hopkins that had become friends with Deddy and our family, understood what that last visit was.  It was goodbye. It was not a coincidence that so many of them were not there, it was by design.  Although today is a sad day, I also consider that my father is with more family and friends now than he was on Earth.  It doesn’t make me miss him any less.  It doesn’t make me stop regretting that cancer took his life.  But it does give me faith and hope that I will see him again one day.  And I believe that faith and hope are two of the most important things that Deddy left to those he loved.