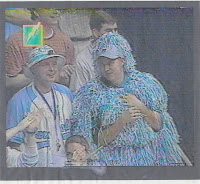 When I was a kid growing up, I quickly grew to love playing ball. I loved baseball, basketball, and football. I was actually in Houma, LA the night Carolina won Dean Smith's first National Championship in the Superdome. It was crazy. I really wanted to be there but my father could not get tickets. But I watched that game with certain passion. In the end of course, a freshman named Michael Jordan won my allegiance with a last second shot. As I watched Dean Smith hugging his players, I was more glad for him than I was anyone. I just knew he had to be a really nice man. After that game, I knew UNC was where I was going. When it was time for me to start applying to colleges, I applied to one.

When you go to UNC or even if you are just a fan, there is an allegiance that exist like no other. Carolina fans worry about Carolina athletics. Most of the other ACC schools worry about there own school first, but immediately worry about Carolina. The concept of the "ABC" (Anybody but Carolina) is very real. We have always been the ONE team, that all of the other schools worry about and hate. Most of the ACC schools consider us their MAIN rival. I had a State fan to actually email after the ACC tournament to give me grief about Carolina NOT winning the ACC tournament. See my point?? State did not make into the NIT tournament, but he was more worried about what Carolina was doing. In case you're keeping score, he has had a bad day since the spring of 1983.

But it is great to be a Tarheel. We don't have the best team every year, but we almost always have at least a good chance to win. Some fans have argued with me on occasion that they would rather not get to the final four than lose. I usually congratulate them on their schools achievement of almost never putting them in that situation. I mean really, think about it...DOOK has had much success over the last 20 years, but other than that, you can add up the accomplishments of all the other ACC teams combined and you will not get the pedigree that Carolina has created.

As I watched the National Championship, I realized how historical the game was. It is not very likely that Carolina will make a run through the tournament like they did this year. We won every game by a comfortable margin. They had a well balanced game plan, every player made considerable contributions, and they probably played the best defense they had played all year. So let's sit back, relax and enjoy the fact that we have so much to be proud of. Just enjoy that the fact that it's a great day to be a Tarheel.
Posted by K-Rob at 9:53 PM