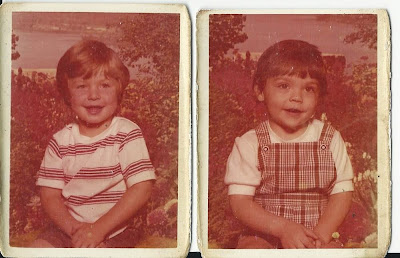 I believe that one of the blessings God gives us are memories. The difficult memories have taught us lessons and made us stronger. The fond memories remind us of good times and give us courage to face tomorrow.

We all have great memories of things that have happened in our lives. We all go through tough times, but most of us have many more good memories than bad ones. I have a strange memory. I can remember extraordinary details from as young as 3 years old, but I will go to the grocery store to get 3 things and forget 2. I can remember before I started school, sitting in Mema Cameron’s kitchen and eating Corn Flakes with sugar and bananas. At the time, Corn Flakes had pictures on the backs of boxes of famous historical figures. Mema saved a bunch of them and would hold them up while I ate and ask me who they were and what did they do. I remember Columbus, Eli Whitney, Henry Ford, Thomas Edison, John F. Kennedy, etc. When I started school, I did not understand why everyone else did not know who these people were. I mean, didn’t everyone eat Corn Flakes?

My life at home growing up was incredibly entertaining. Before “Reality TV”, I lived on one of those shows. I did not have typical parents. Deddy was funny without trying. Mama could turn a 15 minute trip to the grocery store into a 2 hour story! Travis and I always had something going on. Many a night was spent in Mema and Papa Brafford’s yard playing football with Sammy Ray. We used to love going to Marshall and Kevin’s to ride bicycles and “play.” One of my favorite stories about my Papa Brafford is about a time when Travis, Sammy Ray and I were riding to the store with him. He stopped and spoke to a gentleman who was putting up mailboxes with his children. In good humor, the gentleman said, “That’s not much help you have today with you is it Mr. Brafford?” Without cracking even a slight smile, Papa responded, “It’s a lot damn better than what you have helping you!” When the gentleman was laughing it off, he put the truck in “drive” and we rode away. Of course, Travis, Sammy Ray and I were about to blow a gasket laughing. Even Papa got tickled and said, “Well, the truth is the truth.”

My Papa Cameron passed away when I was in the 8th grade. One of the most important things to Papa was for his grandchildren to get an education. Ironically, the day he died, we had a huge ice storm and schools were closed so we didn’t have to miss any days. He passed away in 1987 and only recently did my Mema Cameron look at his wallet and she let Travis do that. In his wallet were 3 pictures of me and my cousin Marshall. I was 3 years old and Marshall was 2. He had been carrying those pictures in his wallet since 1976, because he had written the date on the back of each picture. Although he died from cancer, his demise is not what I remember. What I remember are the many good times we enjoyed during his life. The bigger we got, the more he loved to joke with us. By the time he passed away, Marshall and I were about as big as he was. He loved to ball his fist up and shake it at us and say, “You see that right there, I can whoop you in about 10 seconds.” I would tell him he couldn’t whoop me if he tied my arms behind my back. He would respond with incredible laughter. He loved for us to joke with him like that.

I used to work with Deddy’s brick crew every summer. None of those guys would ever come to a baseball game, but the day after every game, they would want to know about the entire game, pitch by pitch. It was so hot during those summers you could barely stand it. I’ll tell you this, if people want a way to motivate children who do not care about school, let them get a hard manual labor job in 90+ degree weather, and they will soon appreciate every opportunity they have. Don’t get me wrong, we need people for every job in America. I also don’t care what that job is, it’s important to make the world go around. But for me, that job made me determined and committed to be dedicated to whatever I did.

I listen to people all the time talk about their lives. We were given two ears and one mouth for a reason. Sometimes I have a tendency to forget that. But everyone talks about moments in their lives that made a difference. There is so much stress in our lives today. We are constantly worried or concerned about something going on in our lives. But no matter what, we can always recall fond memories. We all have wonderful memories of holidays, family cookouts, birthday parties, etc. Even when you think of people who have passed away and are no longer with us, you almost always think of the good times. I can think of an endless number of good memories about Deddy, but I would have to think harder to come up with a bad one.

Life is filled with highs and lows. But as I get older, it’s obvious to me that people who look for good in others, make every effort to do the right thing, and lead lives of genuine honesty and integrity, live a much happier life than those who don’t. We all know someone who complains constantly. What those people often don’t realize is that the one person they are making the most miserable are themselves. That’s just not a good way to live. Other aspects of life that we always remember are moments that we truly appreciate. The year my father was sick, Jason McPherson called me every single day but 2 and he had a reason he did not call those days and told me beforehand. That’s not something you forget. Jason, his brother Lee and his father had also been planning a trip for several months when Deddy really started to decline. I knew I had to make a decision whether or not I was going to tell him just how critical the situation was before he left. I didn’t want him to cancel his trip, but I knew if I didn’t tell him, he would never forgive me if Deddy died while he was gone. So, with an extraordinary amount of self courage, I rode over to his house and I explained to him how grim things were getting. We sat on his front porch and it’s a moment in my life I’ll never forget. We both had always thought of Deddy as someone who could chew up barb wire and spit out BB’s. To openly discuss his imminent demise was an overwhelming dose of reality for both of us. However, anytime Deddy comes up, we always remember a good or funny story of some sort. We rarely discuss the last few weeks he lived.

I go to one race a year, the “All Star Race” in Charlotte. It’s a big group of family and friends. I enjoy watching the race, telling stories, and having a good time. But I think more than anything else, I go for the memories that we have after each one. Like Uncle Boyd always explaining to us that the drivers today could not hold a candle to the drivers 25 years ago! How in the WORLD could Jimmy Johnson, Jeff Gordon and Kyle Busch race with Bobby Allison, Bill Elliott, David Pearson, and Cale Yarborough? The answer per Uncle Boyd… “They couldn’t!”

Two of the most important things in this world are money and power. I’m not saying that’s right and I’m not encouraging anyone to live for either of them. I am just making an observation that it’s become the world we live in. But at the end of one’s life, both of those are irrelevant. I’ve never known anyone to wish they could live longer to continue a life of ill repute. We want to live for the people we love, to spend more time with family and friends, and to do more good before our time is up. For my Papa Cameron, the material things in this world were irrelevant the last few weeks he was here. However, what did matter was indicated by the pictures in his wallet. When you think about it, all of our lives are reflective of the pictures we each carry in our own wallets. Don’t ever underestimate how important you are to everyone around you. And trust me, nobody gives a damn about how much money you made or how much power you had, but the pictures they find in your wallet 25 years later remind everyone of all the good you ever did.

https://twitter.com/K_RobsWorld
Posted by K-Rob at 1:25 PM

I treasure the memories I make every day with my kids, my husband, the rest of my family, and my friends. Thank you K-Rob for sharing your beautiful memories and encouraging us to reflect on ours. If we all practice gratitude for what we have right now we instead of what we wished we could have tomorrow, we will experience joy.

Great point Belinda about having gratitude for what we have right now! I wish you and your family the best always!