This Easter is Different 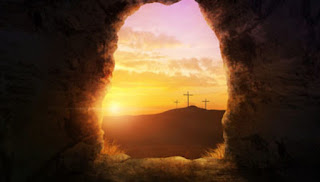 Usually at this time of the year, we are going to church, planning a Sunday afternoon with family, coloring eggs and honoring the most significant week for Christianity.  But this year is different.
The world is in the midst of battling a virus unlike anything we have ever seen in a lifetime.

The challenge is that it’s a virus that has already mutated several times.  We know that the elderly and people with health conditions are very high risk.  However, this virus is killing young, healthy people in some instances and we just don’t know why.  Social distancing is the norm and that effort seems to be the best strategy for now.

Over 2000 years ago, the world was also battling a crisis.  One that was much more significant.  Jesus Christ was here to save us all and he was condemned by almost everyone around him.  The leaders of Rome ruled the world at the time and had absolutely no faith in what Jesus preached.   The religious leaders of the time considered his teachings blasphemy and wanted him put to death.  They were actually pressuring the leaders of Rome to execute Jesus.  The people turned on Jesus too.  They had observed the miracles over and over, watched Him heal the sick, forgive the sinful and show compassion to those in need. Yet when given the choice between Jesus or Barrabas to be freed, they turned on Jesus and started chanting Barrabas.  Pontius Pilate did not even understand why the people had turned on Jesus because he did not think he had committed a crime.  The fact that Pilate was having his own internal struggle with what was going on indicates just how wrong the situation was.

So they condemned Jesus.  They beat and tortured Him, they mocked Him with a crown of thorns and they made Him carry His own cross to the top of Calvary. Then they nailed Him to a cross with spikes.  He was hung high on the hill to bleed to death while some of the soldiers gambled over his clothing.  And by the afternoon, Jesus appeared to be dead.

What occurred next indicated to the world that Jesus Christ was indeed the Savior.  The sky turned dark for 3 hours, there were earthquakes, rocks split in half, and one of the centurions exclaimed, “Truly this man was the Son of God.”  The religious leaders realized they had made the biggest mistake they had ever made when the veil of the temple was ripped from top to bottom and the temple was destroyed by an earthquake.  The world was consumed by fear and grief from what had been done.  His disciples were in shock and disbelief.  His followers were lost and confused.

But three days later, Jesus was resurrected and the faith of his followers was restored.  During challenging times, our faith is often challenged.  There is just no rational explanation why some things happen in this world.  Why in the world did a virus like COVID-19 ever even come into existence?  I’m not sure but I do think it brings out the best in many people.  All across America, health care workers are working harder than ever to help those in need.  Cities are taking a moment each day to cheer on the doctors, nurses, EMT’s, policemen, firemen and anyone else that is going the extra mile to get us through this pandemic.  Factories have stopped making consumer goods to make sanitizer, face masks, face shields and other imperative equipment needed by medical staff all over the United States.  Individual citizens are setting up shops in their homes to make face masks for friends, family and hospital staff.  It’s unfortunate that we don’t have such a supportive attitude all the time as a society.  So much more could be accomplished if we worked together to make the world a better place each and every day.
It may seem like social distancing, community spread, and economic downturn are going to last forever. It will not. Right now, we are in a time of uncertainty, similar to the 3 days after Jesus’ crucifixion.  But we will discover keys to treating the virus, we will develop a vaccine, and we will get back to a normal society again. We have to maintain hope, be of good courage and continue to support each other.  Challenges exist, but faith will see us through, and the Lord will be there for us the entire way.

Happy Easter to all of you and may God bless your families during these extraordinary times. #keepthefaith #heisrisen #jesusisking

My dear Robbie,
I believe you missed your calling to the ministry. Your blog was right on target and it proclaims the "good news" that Christ is alive,and He's there for us during the good times and the bad. He will never leave us nor forsake us. This Easter was different, but maybe just maybe we had time to reflect of how blessed we are, and get our priorities in order. So proud of you! Thanks for taking the time to compose this excellent blog. Love to you and sweet, beautiful Maria. Happy Easter Monday!